Earlier this year we began a series of interviews with leaders in the LGBTI community in which we talked about their hopes for 2020. We suspended the interviews because of COVID19, but for Lesbian Visibility Week – which begins today – we’ve spoken to Lilly Dragoeva, Secretary of our board and organiser of Sofia Pride in Bulgaria.

What do you think are the biggest challenges facing the LGBTI community in Europe right now – including COVID?

Sadly, still there are numerous challenges that the LGBTI communities in Europe face, including the lack of legal recognition and protection, numerous acts of hate and fear of being out due to lack of family support and social acceptance. Not being your authentic self 100% of the time is a challenge that too many LGBTI people still face in Europe today.

The rise of populism and anti-human rights rhetorics is a great challenge that we all face, too. We have seen that over the last few years, the smear campaigns against LGBTI rights, women’s rights and children’s rights have become the new normal. This is extremely dangerous and we already see the effects of it in some EU countries. 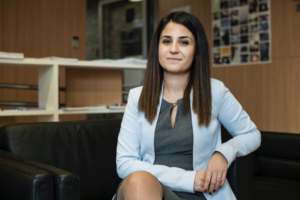 In the light of the Covid-19 outbreak, the LGBTI community in Europe currently faces even more challenges connected to the extraordinary situation in which we find ourselves. In times of crisis, the most marginalised and most vulnerable tend to be exposed to even greater threats. Over the last few weeks, members of the LGBTI community have been subject to discrimination in cases of job cuts due to Coronavirus, trans* and intersex people have been denied ‘unessential’ healthcare treatment and many LGBTI youth have been quarantined with LGBTI-phobic family members. The levels of domestic violence and mental health issues have increased greatly among members of our communities and we are trying to find ways to provide much needed help and support.

How can the Pride movement help to combat these challenges?

The Pride movement is a mighty tool for change and I strongly believe that power of Pride can help overcome the widespread social distance and lack of acceptance though the visibility it creates. In times when we spend most of our lives on social media, Pride is bringing together thousands and thousands of people united by the same values and hope for a better future. This is not a force that can be easily overlooked. And as a human rights activist, I am fascinated by the strength that Pride gives to LGBTI people and how it inspires them!

What’s your biggest hope for Pride in the time of COVID?

Well, that some will take place! 2020 is an extremely challenging year for the Pride movement with so many postponements and cancellations already announced. I think that every Pride event in Europe and in the world will be affected by the COVID19 outbreak one way or another. Reducing supporting program events, offering online alternatives, postponing for later in the year with the hope that the situation will allow for the Pride marches to happen… This is all very sad and is completely unprecedented! Just last year we celebrated the resilience of our community with the 50th anniversary of the Stonewall uprising, celebrating the ongoing fight for freedom and equality despite all challenges. But 2020 is unique so my biggest hope is that we keep Pride in our hearts. And to all Pride organisers out there I want to say that you are not alone. I am sure that the rainbow will appear after the storm yet again!

Let’s hope that we manage to overcome COVID19 in the coming weeks and months. Looking further ahead, how would you like to see Pride develop in the rest of the decade?

I don’t want to sound pathetic but I think that Pride will never be the same after 2020. My feeling is that the current situation will leave a mark on all of us as humans but also on us as Pride organisers. What I would like to see is the Pride family grow stronger and more united after the end of the crisis. I would also like to see smaller towns and even villages all across Europe have their first prides in the upcoming years. I am most excited when I see the first steps of a new Pride – having their first march despite all odds, despite the difficult context and despite the strong backlash from religious groups or politicians. I would like to think that the future of Pride is going back to the roots, remembering the fight and that Pride is a protest.

Which Prides are you really looking forward to visiting in the future?

I really do hope that EuroPride in Thessaloniki will take place some time in 2020! Being from the Balkans myself I was extremely excited to be part of the first EuroPride to take place here, one of the most difficult regions in Europe in terms of LGBTI rights and social acceptance. I know the entire team of Thessaloniki Pride and I know how much effort and heart they have put into making Thessaloniki EuroPride an amazing event. So I hope they will get their chance in 2020!

Finally, what’s your most cherished memory of a Pride?

The march itself was several times bigger than expected, with so many people walking the streets of Skopje. The sense of community and togetherness was so strong! And the feeling that we are making history; that these couple of hours mean the world to an entire generation of LGBTI people who never before had the chance to be who they truly are and together. It was so powerful!

Lilly is Secretary of EPOA’s board, Executive Director of the Bilitis Foundation, and Coordinator of Sofia Pride. Follow her on Twitter @LillyDragoeva and on Instagram @lilly_drag_o_eva.

We use cookies on our website to give you the most relevant experience by remembering your preferences and repeat visits. By clicking “Accept All”, you consent to the use of ALL the cookies. However, you may visit "Cookie Settings" to provide a controlled consent.
Cookie SettingsAccept All
Manage consent

This website uses cookies to improve your experience while you navigate through the website. Out of these, the cookies that are categorized as necessary are stored on your browser as they are essential for the working of basic functionalities of the website. We also use third-party cookies that help us analyze and understand how you use this website. These cookies will be stored in your browser only with your consent. You also have the option to opt-out of these cookies. But opting out of some of these cookies may affect your browsing experience.
Necessary Always Enabled
Necessary cookies are absolutely essential for the website to function properly. These cookies ensure basic functionalities and security features of the website, anonymously.
Functional
Functional cookies help to perform certain functionalities like sharing the content of the website on social media platforms, collect feedbacks, and other third-party features.
Performance
Performance cookies are used to understand and analyze the key performance indexes of the website which helps in delivering a better user experience for the visitors.
Analytics
Analytical cookies are used to understand how visitors interact with the website. These cookies help provide information on metrics the number of visitors, bounce rate, traffic source, etc.
Advertisement
Advertisement cookies are used to provide visitors with relevant ads and marketing campaigns. These cookies track visitors across websites and collect information to provide customized ads.
Others
Other uncategorized cookies are those that are being analyzed and have not been classified into a category as yet.
SAVE & ACCEPT